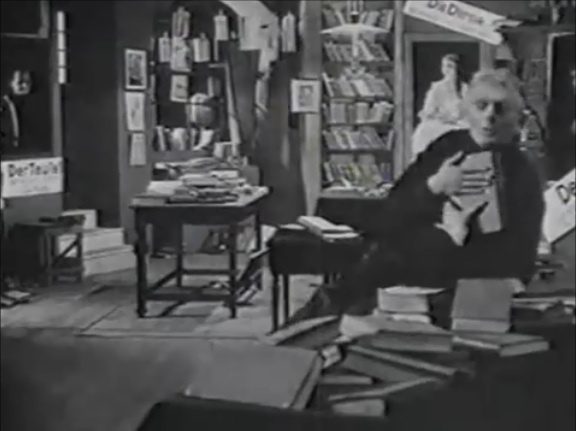 Screen print from Unheimliche Geschichten (Eerie Tales), a film made in 1919 by the Richard-Oswald-Produktion Company in Germany

Wormwoodiana presents an article that first appeared in Book-Lore in May 1887, which proves that nothing much changes in the world of book collecting:

Lord Lytton, in that curious and mysterious novel, Zanoni, mentions an old bookseller who, after years of toil, had succeeded in forming an almost perfect library of works on occult philosophy:

” A purchaser was indeed a deadly enemy to the old man, for every proffered coin was scorching hot, a miserable and inadequate exchange for one drop of purple blood… They will gloat over the mysteries of Hermes, and nervously finger the pages of Agrippa, that foul magician whose judgment of himself and all his labours is so eloquently portrayed in his Vanitie of Arts and Sciences. No matter, says the devotee, Agrippa was mistaken; he was afraid of the Inquisition, and recanted.”

The old bookseller was a type, and, as we think, a type only of Lytton’s own creation; perhaps a reflection of the soul of Lytton himself, ever groping through mists of tale and fable, and ever unsatisfied.

The purchaser of works on occult philosophy is usually exceedingly enthusiastic, so much so that he persists in his so called studies, notwithstanding the fact that nine tenths of his books are in Latin, a language of which he knows little or nothing…

His course of reading so far has been confined to the Strange Story, which first riveted his attention on fiends and spectres, and to Barrett’s Magus, which, being in English, and adorned with a number of weird plates, has proved an excellent stimulant to further exertions. The Bible is ransacked, and the Witch of Endor and Simon Magus duly weighed in the balance, while such phrases as “Now the magicians of Egypt they also did in like manner with their enchantments,” roll off the tongue with unctuous volubility. Presently the aspirant to “horrors fell and grim” stumbles across the treatises of Raphael and Sibly, and sighs to think that his ignorance effectually cuts him off from the delightful contemplations of those obscure authors upon whose diatribes their works are founded.