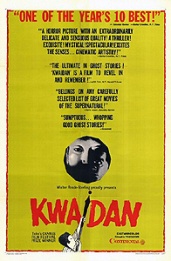 I was back at 1000 Misspent Hours and Counting today, searching for the few entries I haven’t already read, when I came across this 1964 Japanese movie, released in the U.S. in 1965, known variously as Kwaidan, Ghost Stories, Weird Tales, and Kaidan. The back story is one of the most interesting I’ve read in a long time. It begins:

If anybody ever merited the appellation, “man of the world,” it was Patrick Lafcadio Hearn. Born on the Aegean isle of Lefkada to a Greek mother and an Irish father, he spent most of his childhood in Dublin before emigrating to the United States at the age of nineteen. As a newspaper writer in Cincinnati, Hearn became known as both an accomplished muckraker and a tireless friend of the downtrodden and marginalized. Hearn’s aggressive free-thinking and love for the disenfranchised wasn’t just a professional matter, either, for his first wife, Alethea Foley, was a black woman— more than simply unconventional, their union was actually illegal in Ohio at the time! But it was in New Orleans, to which he relocated (apparently without Foley) in 1877, that Hearn discovered his greatest talent. Writing first for a succession of newspapers and later for Harper’s Weekly and Scribner’s Magazine, he developed into a folklorist and ethnographer of exceptional ability. He wrote on Voodoo, Creole dialect and cuisine, and all manner of topics that might be placed under the heading of New Orleans folkways, and then repeated the performance in the West Indies a few years later. Finally, in 1890 (and now we begin closing in on the actual point of this ramble), Hearn made a fateful journey to Japan as a newspaper correspondent. The official assignment lasted only briefly, but Hearn’s sojourn in the Land of the Rising Sun would consume the remaining fourteen years    of his life.