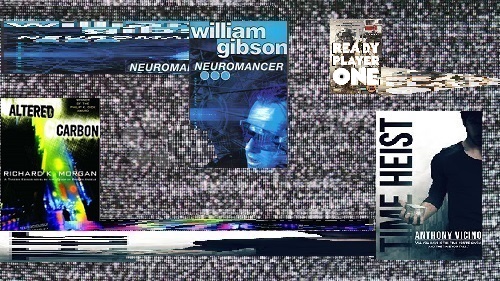 I’ve started reading three or four books in the past week and set them aside because I just couldn’t stay interested. But finally, I’ve latched on to a good one! I’m reading Time Heist by Anthony Vicino. It’s the real thing. I’ll even give Vicino a free pass for promoting himself in this article he wrote about cyberpunk, because his book really does belong on the same page as these others. The article in question contains the following observations:

Cyberpunk ain’t coming back. Not like it was back in the 80’s and 90’s at least, when masters like Gibson and Stephenson and Sterling were doing their things. No more leather dusters and mohawks cruising the Tokyo slums looking to jack in.

But that’s okay, ‘cause here’s the good thing: Cyberpunk never really left. (Ha, plot twist. How’s that for being entirely contradictory? That’s just me trying to keep you on your toes!)

Cyberpunk has evolved. Into something better? Maybe. Maybe not. Certainly different if nothing else. But here’s the awesome part: It’s been hiding right under our noses the entire time.

There is a blog called Red Eagle’s Legacy, and on that blog, there is an interview with Anthony Vicino, who has a blog called One Lazy Robot. Anthony Vicino is also the author of a novella that I enjoyed reading, called Parallel. I thought, why don’t I route the blog with an interview about a book and another blog through my blog – maybe the end result will be atomic fission. Or maybe not. Time will tell.

Here are a couple of excerpts from the interview:

REL: I really enjoyed the framework of the parallel dimensions. This sci-fi conceit has been used plenty of times by many different authors and screenwriters, but you used it in a very accessible way. Did you have any inspiration for this?

AV: If I’d written Parallel forty years ago it would’ve been a solid twenty pages longer filled with dense info-dumping. Readers back then simply didn’t have the frame of reference for it. I’m lucky that in the past twenty years there have been a lot of great television shows (Sliders and Fringe) playing with this very idea. As a story device it’s been flushed out enough in popular culture that you only have to lay the barest groundwork and people can jump right in and hit the ground running.

REL: Speaking of well used tropes which was written completely naturally, the Aurora/computer integration. Felt like this was one of the strongest parts of the story background. Your concept of the data integration to the mind just seemed obvious, but I’ve never quite seen it presented this way before. To me it felt like the natural step to where the future of technology is headed. Is that how you see it? Are future humans going to have more interconnection with computers? What’s the basic breakdown of your thought percentages? (i.e.. 5% to breathing, 40% to getting food, 50% wondering if the Marvel universe is actually good or just better than most low brow entertainment the public is fed, etc.)

AV: Oh man, my thought percentages would be so peculiar. I have pretty severe ADHD so I don’t multi-task very well. I work best when I focus one hundred percent on a single task until it’s finished and then move onto the next thing.

The thing I find fascinating about computer integration is that progress in this area is all about improving efficiency. We already interact with our computing systems (smart phones and computers), but we lose so much potential productivity simply as a consequence of how we’re interacting. The logical step is to remove the barrier between computer and brain, creating a symbiotic relationship between the two.

I deal with this concept a lot in my book Time Heist, because the possibilities are limitless. Researchers have already shown such amazing progress in the field of neuroprosthetics (cochlear implants, motor neuroprosthetics that restore movement to individuals with motor disabilities, visual implants) that it’s hard imagining a future where this technology is not as common place as current smart-phones.

P.S. Let me know when you figure out whether or not Marvel is actually any good. This question keeps me up at night. We might need Aurora on this one.