Dead Men Naked  is the best novel I’ve read in while, satisfying to the end. All too often, books with supernatural overtones veer into preposterous territory, but not this one. Author Dario Cannizzaro achieves a near-perfect balance of realism and phantasm, humor and melancholy, the familiar and the uncanny. It is an incredibly fun read about soul mates, tequila, occult incantations, death, and visions of a giant crow. The somewhat flippant title derives from a poem by Dylan Thomas called “And Death Shall Have No Dominion,” and, indeed, there are people in Dead Men Naked who seek passage beyond death’s veil. Cannizzaro says on his website that while writing this book, he “pestered people with talks about religion, philosophy, death for an incredible amount of time.”

To get an idea of his background, consider this quote from an article Cannizzaro wrote for The Galway Review in 2016. The author talks about skipping school with his friends at age 15 while living in in Italy:

We would go in the city center of Pozzuoli, and hide into a dark alley. In the alley there was a tattoo joint, a hearing aid shop, and a very small library, called Il Nome della Rosa, after Umberto Eco’s book (The Name of the Rose). The owner, Gino, would entertain his guests with delicious comments about books, poetry, literature. It wasn’t long before we started spending our mornings there, talking with Gino and drinking Espresso, while watching the whirlwind of customers – lost souls on the lookout for human connection – writers, poets, mothers, sons; fishermen, shop-owners, unemployed hippies – the whole humanity passed in that library, 20 to 30 square meters of enlightened soil, much like the sacred ground of a secret church.

Dead Men Naked reflects that mixture of ancient mystery and youthful curiosity. The main characters, Lou and Mallory, seem like people I would hang out with for pizza and beer, or in Louis’ case, Tequila. He only sees his friend’s ghost while drinking tequila. Tequila has a mystique unlike any of the other major alcoholic beverages. A Huffington Post article presented by Patrón says, “In the mid-20th century, tequila sales spiked after California residents thought it was a psychedelic. They were just confusing mezcal with mescaline (the psychoactive alkaloid of peyote” (Huffington Post, Oct 06, 2014). Over the years, Jose Quervo has placed magazine ads that depict deeply surreal colorful sunsets over small gatherings of men and women, smiling as though in states of altered consciousness, with various taglines, including “It’s all true” and “Anything can happen.” Special limited edition bottles display gold and silver mustachioed skulls. One might argue that tequila’s mystique is a fabrication, but after all, most magic is about what one believes to be true. “The universe is what you observe,” the Grim Reaper tells Lou. “Whatever you experience in your life, you experience through your senses.” It’s all real.

We get a hint that maybe Mallory has seen beyond the veil, too. She has a collection of books on the occult and she knows how to use them. Something weird happens, resulting in Mallory’s disappearance. Hoping to find Mal at her sister’s house, Lou goes on a road trip with the Grim Reaper in the passenger seat to keep him company and call the shots. They drive through a noir world of seedy bars until they find Mal’s twin sister, Angie. Death takes either a holiday or a back seat when Angie joins Lou on a ride through the desert to an out-of-the way abandoned house where the girls once lived with their mother. It is on this trip that Lou quotes the Dylan Thomas poem, forming an emotional connection between the two, in which “there was no car, no time, no road…no faith, no evil, no sun, no sea… nothing but the nakedness of the word, sliding from me to her and bouncing back from her eyes.” At the mother’s house, in the basement, they find the books and notebooks evincing an in-depth study of dreams, mythology, religion, and “Old Latin spells mixed up with Caribbean voodoo and African juju.” It gets weirder and better.

There are so many good moments in Dead Men Naked, it’s impossible to discuss them all. Worth mentioning are the beguiling passages about crows in chapter twenty-two. Around the world, crows represent, variously, a trickster, a harbinger of death, a sign of transformation, and depending on what direction they are flying, the imminent approach of either your enemy or your true love. The crows in this chapter punctuate Lou’s action as they gather, squawk, and seemingly mock his angst with gawking, open beaks. It’s a great image and better than I can describe it.

I would like to mention one more thing. Perhaps you’ve heard about writers who don’t use quotation marks. Cormac McCarthy comes to mind. When interviewed in 2008 by Oprah Winfrey, McCarthy warns other writers that if they plan to leave out quotation marks, they really need to “write in such a way as to guide people as to who’s speaking.” I’m here to tell you that Dario Cannizzaro pulls off this feat like an expert. Trust me on this: You will have no trouble understanding who is talking to whom in Dead Men Naked.

I highly recommend this book.

This is from a blog called A Year in the Country: 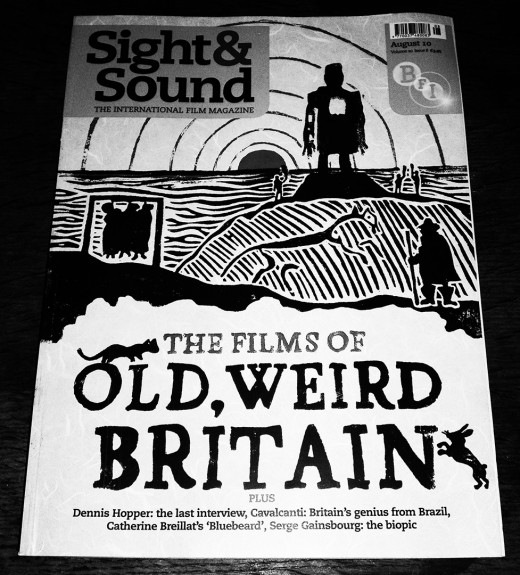 “Recent years have seen a ‘rural turn’ in British cultural studies. Artists have wandered into an interior exile and a re-engagement with the countryside – its secret histories, occult possibilities. Psychogeographers are drawn to its edgezones and leylines, fringe bibliophiles are rediscovering the dark glories of writers such as Alan Garner, John Wyndham and Nigel Kneale, while organizations such as English Heretic and Lancashire Folklore Tapes exult in mystical toponymies and wiccan deep probes.

Steve Aylett posted this video on Facebook recently. I’ve only watched part 1 of this program, but Robert Anton Wilson’s comment that Jack Parsons was both an engineer and an occultist corresponds with my unofficial “mission statement” of erasing the line between science and mysticism.

Screen print from Unheimliche Geschichten (Eerie Tales), a film made in 1919 by the Richard-Oswald-Produktion Company in Germany

Wormwoodiana presents an article that first appeared in Book-Lore in May 1887, which proves that nothing much changes in the world of book collecting:

Lord Lytton, in that curious and mysterious novel, Zanoni, mentions an old bookseller who, after years of toil, had succeeded in forming an almost perfect library of works on occult philosophy:

” A purchaser was indeed a deadly enemy to the old man, for every proffered coin was scorching hot, a miserable and inadequate exchange for one drop of purple blood… They will gloat over the mysteries of Hermes, and nervously finger the pages of Agrippa, that foul magician whose judgment of himself and all his labours is so eloquently portrayed in his Vanitie of Arts and Sciences. No matter, says the devotee, Agrippa was mistaken; he was afraid of the Inquisition, and recanted.”

The old bookseller was a type, and, as we think, a type only of Lytton’s own creation; perhaps a reflection of the soul of Lytton himself, ever groping through mists of tale and fable, and ever unsatisfied.

The purchaser of works on occult philosophy is usually exceedingly enthusiastic, so much so that he persists in his so called studies, notwithstanding the fact that nine tenths of his books are in Latin, a language of which he knows little or nothing…

His course of reading so far has been confined to the Strange Story, which first riveted his attention on fiends and spectres, and to Barrett’s Magus, which, being in English, and adorned with a number of weird plates, has proved an excellent stimulant to further exertions. The Bible is ransacked, and the Witch of Endor and Simon Magus duly weighed in the balance, while such phrases as “Now the magicians of Egypt they also did in like manner with their enchantments,” roll off the tongue with unctuous volubility. Presently the aspirant to “horrors fell and grim” stumbles across the treatises of Raphael and Sibly, and sighs to think that his ignorance effectually cuts him off from the delightful contemplations of those obscure authors upon whose diatribes their works are founded.

The fascinating saga of record producer Joe Meek is described by Jan Reetze on her Joe Meek Page, as, “a short life somewhere on the fine line between vision and lunacy . . . oversped, funny, sad, euphoric, depressed; a rollercoaster trip with a dramatic showdown.”

Joe Meek made some of the most spooky-sounding records of the 1960s, and they soundtracked a life that included murder, suicide, inventing Goth, communicating with cats, and holding black magic séances. He’s been called “the Ed Wood of lo-fi”.