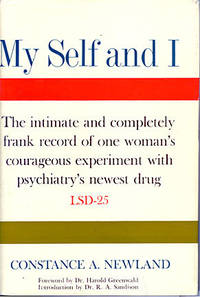 First up, here is Gary Westfahl to give us some background on actress, writer, and psychic researcher with a PhD from the University of California, Thelma Moss, also known as Thelma Schnee:

She wrote screenplays for two episodes of Science Fiction Theatre: “The Negative Man” (story by Ivan TORS) (1955), “The Throwback” (1956); and for the movie The Colossus of New York (story by Willis Goldbeck) (1958).

She acted in “The Devil in Glencairn” (1951), episode of Lights Out and co-produced, with Paul Finder Moss, Ant City (documentary short) (1950).

Schnee ingested LSD as a participant in experimental therapy and wrote a book about her experiences, My Self and I (1962), using the pseudonym Constance A. Newland. Then, she may have recalled the conclusion of “The Negative Man”: having lost his improved senses, the hero resolved to go back to college so he could further research the mysteries of the human mind. And Schnee, now calling herself Thelma Moss, did exactly the same thing, eventually earning a Ph.D. from the Psychology Department of the University of California, Los Angeles, where she also was given a position as a full-time professor. Further, while heading a facility dedicated to parapsychology, she chose to specialize in studying the very stuff of science fiction—psychic powers, ghosts, and astral projections recorded by Kirlian photography. Perhaps these investigations into occult matters represented her effort to reconnect with her late husband, though unlike the heroes of science fiction, she never achieved definitive proof of these phenomena, and while she was a well-respected researcher in the 1970s, her area of expertise is now relegated to the status of pseudoscience. Yet she still commands attention because she effectively gave up writing science fiction in order to prove that science fiction was true.

Next, Wikipedia tells us:

Born Thelma Schnee, a native of Connecticut, she graduated from Carnegie Tech, and originally pursued a career in acting and in writing scripts for film and television. She was one of the earliest members of The Actors Studio; as a scriptwriter, her biggest success was the screenplay for the 1954 Alec Guinness film Father Brown.[2]

The books of Thomas Pynchon are so chock-full of cool references, I had to make two collages for this blog entry. Pynchon is one of my favorite writers. I recently read his noir-hippie novel, Inherent Vice (The Penguin Press, New York, 2009). The term “inherent vice” is a legal term that refers to  physical properties of goods which may cause them to suffer deterioration or damage without outside influence, like rust or decay. Near the end of the book, someone asks if  “inherent vice” is like “original sin.” By  this time, the story has unfolded to the point where we recognize that even the so-called “good guys” are flawed, which is not a new theme of course, but Pynchon just does it so well. Here are some of the observations I jotted down while reading Inherent Vice, whenever I had the presence of mind to do so:

There was a show on television about drugs, either PBS or the History Channel, which ended by suggesting that the internet might provide the “expanded consciousness”  sought by hippies and psychedelic gurus like Timothy Leary. And, in fact Wikipedia tells us:

By the mid 1980s, Leary had begun to incorporate computers, the Internet, and virtual reality into his aegis of thought. Leary established one of the earliest sites on the World Wide Web, and was often quoted describing the Internet as “the LSD of the 1990s. ”

Pynchon touches upon this idea in Inherent Vice. Private investigator Doc Sportello consults with an 1970 version of a computer geek named Fritz, is, who looks up information on a forerunner of the World Wide Web called ARPAnet. Fritz calls it “surfing the wave of the future.” He tells Doc:

(We) just got this new hire in, name of Sparky, has to call his mom if he’s gonna be late for supper, only guess what – we’re his trainees! He gets on this ARPAnet trip, and I swear it’s like acid, a whole ‘nother strange world – time, space, all that shit.

“So when they gonna make it illegal?” asked Doc.

I like the way Pynchon throws philosophical concepts into his stories without annoying anyone who doesn’t give a rat’s ass about philosophy. Case in point, again from Inherent Vice:

While spying on some shady characters, Doc Sportello is surprised and alarmed to see a rather risque, hand-painted image of his ex-girlfriend, Shasta, on a neck-tie worn by one of the thugs. Not only does Doc feel a twinge of jealousy, he also realizes that Shasta’s life may be endangered by her involvement with suspected criminals. In trying to cope with these concerns, he thinks:

Back in junior college, professors had pointed out to Doc the useful notion that the word is not the thing, the map is not the territory. He supposed you could extend this also to the nudie necktie is not the girl.

Doc’s professors were quoting Alfred Habdank Skarbek Korzybski (July 3, 1879 – March 1, 1950) was a Polish-American philosopher and scientist best known for developing the theory of general semantics. This theory says that people can’t experience the world directly, but only through impressions we get from our five senses and through our understanding of the meaning of words; or to put it another way, words are merely imperfect symbols that represent reality, therefore, reality can never be perfectly understood. This concept is sometimes incorporated into the work of science fiction writers such as A. E. van Vogt, Robert Heinlein, and Samuel R. Delaney, as well as Beat writer William S. Burroughs (whose work can sometimes be classified as science-fiction as well).

Pynchon paints uncanny pictures with words – uncanny because they remind me of scenes or situations I’ve found myself in. It’s not so much that I’ve been the the same exact situations; it’s more a feeling of deja-vu experienced vicariously through Pynchon’s characters:

The sun vanished behind clouds which grew thicker by the minute . . . After hours of detouring for landslides and traffic jams and accidents, Doc and Shasta  finally located the mystically revealed dope dealer’s address, which turned out to be an empty lot with a gigantic excavation in it, between a laundromat and an Orange Julius-plus-car wash, all of them closed. In the thick mist and lashing rain, you couldn’t even see to the other side of the hole . . . Doc and Shasta sat parked by the edge of the empty swamped rectangle and watched its edges now and then slide in, and then after a while things rotated ninety degrees, and began to look, to Doc at least, like a doorway, a great wet temple entrance, into someplace else . . .

For more information on Thomas Pynchon, here is a page created by   Penny Padgett and augmented by The San Narciso Community College. I especially like the section on Pynchon’s influences.