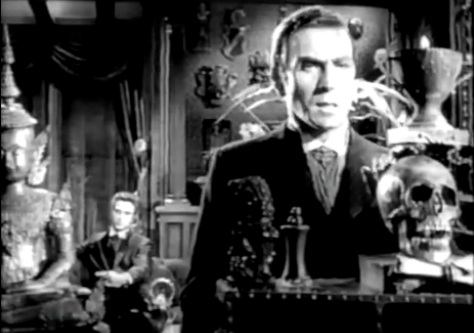 Thanks to Braineater, here’s a better-than-average made-for-TV movie that seems almost like a forerunner of The Night Stalker, but in some ways is actually better than the Night Stalker (in my humble opinion). Webmaster Will Laughlin says:

Intended as the pilot for a TV series called “The Black Cloak”, Dark Intruder is one of the earliest movies to reference H.P. Lovecraft and his pantheon directly — the movie generally credited as the first real Lovecraft adaptation, Roger Corman’sThe Haunted Palace (based on “The Case of Charles Dexter Ward”) came out in 1963. Dark Intruder is not based on any of Lovecraft’s stories, but it bears a strong resemblance to “Charles Dexter Ward”, and its thematic concern with the loss of identity aligns it strongly with other examples of Lovecraft’s writing, including “The Thing on the Doorstep”, “The Shadow over Innsmouth” and “The Evil Clergyman”.