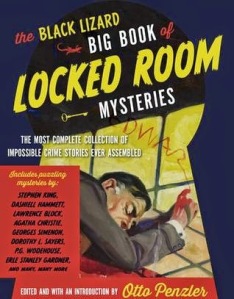 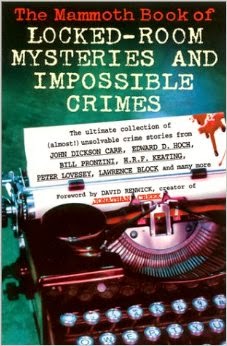 One of my goals is to write a good “locked room” mystery with an original solution. You know, a murder that takes place under seemingly impossible conditions. I refuse to believe all the ideas have been used up. In the meantime, here is a mammoth 7 part review of a locked room anthology that appears on a blog called Beneath the Stairs of Time

The Black Lizard Big Book of Locked-Room Mysteries was compiled by an award-winning editor, Otto Penzler, who, judging by the content page, took great care in avoiding the pitfalls of such previous anthologies as The Locked Room Reader (1968) and Tantalizing Locked Room Mysteries (1982) – covering too many over anthologized stories. There are some of those familiar stories collected here, but they’re, by and large, contained in the first portion of the book.

Familiar As the Rose In Spring deals with “the most popular and frequently reprinted impossible-stories of all-time” and serves as a 1920s-era drawing room to gather all of the usual suspects in: Edgar Allan Poe‘s “The Murders in the Rue Morgue,” Sir Arthur Conan Doyle‘s “The Adventure of the Speckled Band,” Jacques Futrelle‘s “The Problem of Cell 13,” Wilkie Collins‘ “A Terribly Strange Bed,” Melville Davisson Post‘s “The Doomdorf Mystery” and G.K. Chesterton‘s “The Invisible Man.” I have skipped these stories, but there was one I hadn’t read before.

Michael Norris is always welcome here at Bill Ectric’s Place.  He never fails to capture my interest and imagination with his essays. Here is Michael’s latest article, The Absurd Life of the Criminal, via Literary Kicks. Note: Jack Black, the author, is not to be confused with Jack Black the actor.

“I recently read You Can’t Win, the autobiography of Jack Black. This book was a best seller in 1926, and was a favorite of William S. Burroughs. As I read it, I could see how Burroughs’ first novel, Junky, was influenced by Black’s history. But what came to mind more often were recollections of Albert Camus’ The Stranger.

“. . . The common thread in these three books is the fact that their protagonists coast along, allowing external events to determine their fate. In fact, it is their reaction to external events, to the outside world, that defines them. Meursault is not a criminal at the beginning of The Stranger. He has a conventional job. But he gets drawn into a plan of revenge on Raymond’s girlfriend, which sets in motion the events that lead him to become a murderer. Jack Black occasionally thinks of leaving crime and embarking on a “straight” life, but the temptation to make one last, big score keeps him going down the path he is on. Burroughs rebelled against his upper-middle class upbringing, and was searching for a life that negated his bourgeois values. On the way he found heroin and became an addict. After that he did what his need for the drug dictated.”