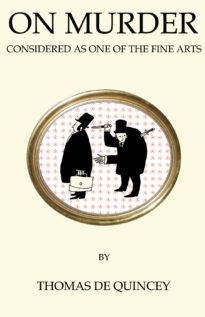 This review was written by Colin Dickey for New Republic, November 2, 2016:

“Murder, in ordinary cases, where the sympathy is wholly directed to the case of the murdered person,” (De Quincey) reasons, “is an incident of coarse and vulgar horror; and for this reason that it flings the interest exclusively upon the natural but ignoble instinct by which we cleave to life.” This attitude to primal panic would never “suit the purposes of the poet.” What, then, must a poet do to elevate such a scene to high art? The only option: “He must throw the interest on the murderer.” Since 1823, this has become commonplace; from The Godfather to Silence of the Lambs to Breaking Bad, it’s become the default position of any serious drama to include the perspective of the murderer. Like it or not, our imaginative lives now reside in De Quincey’s dreamworld.

Fittingly, Frances Wilson’s new biography of De Quincey, Guilty Thing, begins not with his birth or his lineage, but with a murder: In the early hours of December 8, 1811, shopkeeper Thomas Marr, his wife and infant child, and his apprentice were all found dead, their throats slit and their heads bashed in. With no real suspects, the case fascinated everyone in England, but none more so than Thomas De Quincey himself. The Ratcliffe Highway murders, as they became known, inspired in De Quincey a “profound reverie,” according to his friend Samuel Taylor Coleridge, and would occupy his mind and his writings for decades to come. The murders, De Quincey would later write, “had an ill effect, by making the connoisseur in murder very fastidious in his taste, and dissatisfied by anything that has been since done in that line. All other murders look pale,” he concluded, by the “deep crimson” of the Ratcliffe Highway murders.